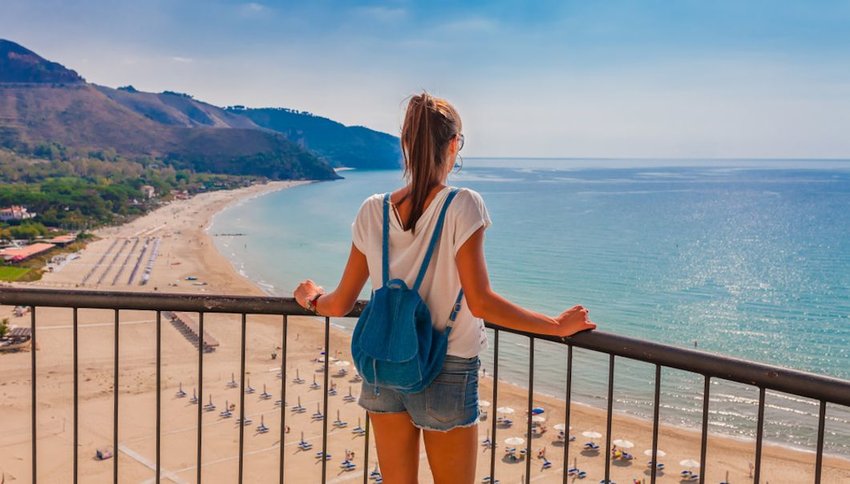 10 Rules You Can't Break as a Tourist

There are plenty of unspoken rules of travel and polite etiquette norms to follow mind when you explore a new destination. But there are even more important rules that tourists occasionally ignore. These rules can get you into serious trouble — not just with glaring locals — but also with the law. Here are 10 rules you should never break as a tourist.

It's understandable that you'd want to make a fashion statement when traveling, but if you wear heels, you may run into bigger problems than blisters. In Greece, it's actually against the law to wear high heels when exploring most of the country's ancient sites, including the Parthenon and the Acropolis. You can also get into hot water for wearing heels to almost any archaeological, ancient stone, or marble site within the rest of the country. And in many temples in Asia, you have to remove your shoes completely before you enter. Stick to sneakers, which are easy to slip off and can help you avoid sprained ankles and citations.

Be Careful Where You Sit

We get it. You've probably been walking for hours and you're tired. But if you need a break, be mindful of where you plant your butt. Sitting on the Spanish Steps in Rome can get you banned from the site. The same goes for almost any historic walkway in the Italian capital. This rule also applies in other cities. In Venice you can be fined for sitting or lying down on bridges or historic monuments. Wherever you travel, it's best to find a proper bench or chair to take a seat if you need a break.

Feeding any wild animal is generally not the best idea — it disrupts their natural behavior and can cause plenty of harm to their digestive systems if you feed them the wrong food. But it's even worse if you're a tourist in a foreign city. You can get a hefty fine for feeding pigeons in Venice (even the famous ones in San Marco Square) and Vienna. There are laws against feeding birds and squirrels in San Francisco parks or the seals in Canada's wharfs. This one is easy to avoid — just keep your snacks to yourself.

Don't Take a Dip Wherever You Want

Be careful where you swim. You can get hit with serious fines for taking a dip in any of Rome's famous fountains or Venice's canals. The same applies for natural bodies of water. Heidi Klum and her rocker husband Tom Kaulitz were fined a whopping $6,000 for swimming in Capri, Italy's famous Blue Grotto. Sometimes the rule is set to protect the local ecosystem or wildlife, as is the case in New Zealand's recent ban on swimming with the dolphins of Bay of Islands. It's always best to do your research or ask a local where you can and can't dip your toes.

If you go swimming where it's permitted, don't assume you can traipse around afterward shirtless or in just a bikini top. In some cities, including Barcelona, Spain (where there are plenty of actual nude beaches), you can get fined or banned for not wearing a shirt in public. Be mindful of your surroundings and pack a dry change of clothes in your beach bag for when you're done with the sun and surf.

Be Smart About Snacking and Sipping

Exploring can work up quite an appetite, but think twice before eating, drinking, or even chewing gum when you're out about. In Singapore, importing chewing gum is illegal, so be sure you don't have any in your pockets leftover from your flight. Eating is prohibited near tourist attractions in Rome, and you can also get fined or banned for putting your mouth on drinking fountains in the city. Eating, drinking, and chewing gum is also a no-no near ancient historical sites in Greece. Also, we're not sure why you would, but just in case, make sure you don't bring pork or pork products to the Maldives. As a largely Muslim country, you could be subject to a fine.

Depending on where you're visiting, laws around drinking, smoking, and drugs may vary, so be aware of what you're getting into before you set foot in a foreign land. You can be fined in the Maldives for bringing alcohol into the country, and alcohol is prohibited outside resort areas. Plenty of countries have banned smoking in public places, and if you're hoping to engage in a city's loose laws on marijuana, just be sure you do some research ahead of time. Despite its reputation, marijuana is still mostly illegal in the Netherlands, with some parts of the country restricting sales to tourists or banning it altogether.

If you're traveling to Dubai or anywhere else within the United Arab Emirates, be careful not to get affectionate outside your hotel room. The decency laws in the UAE prohibit kissing, touching, and even hand-holding in public and can actually land you behind bars. Don't believe us? In 2013, a British couple spent a month in jail for allegedly kissing in a restaurant.

Depending on where you are and where you're headed, don't throw away a single-use train ticket, Metrocard, or similar pass after you've gotten onto the train. In some cities such as Paris and Madrid, you also need your ticket to get off — and not doing so can result in a fine that may break your entire vacation budget. Save yourself the headache and just keep it in your pocket for the ride (or get a multi-ride pass wherever you are, which typically ends up being cheaper anyway).

Be Careful About Souvenirs

Sometimes it can be difficult to find the perfect souvenir to bring home to remind you of your journeys. Maybe you collect postcards or keychains, but be careful if you want to go beyond the souvenir stalls. In most places, it's illegal to take anything from the natural surroundings. This includes things like sand, seashells, rocks, plants, and more. One couple faces jail time for removing sand from a beach in Sardinia, and another man was forced to return rocks he took from a Cornwall beach or pay a heavy fine. These rules apply to almost every natural landscape, from U.S. National Parks to beaches and mountains around the world. So please, just buy the postcard