There’s a reason places like Yosemite National Park and the Grand Canyon receive millions of visitors a year. I mean, who wouldn’t want to spend the day chasing waterfalls or standing over an unfathomable copper-colored canyon? But the U.S. is so vast and diverse, and it’s packed full of relatively undiscovered, unique natural treasures that are hidden in plain sight.

Let’s face it - you could spend a lifetime trying to track down and visit every breathtaking spot in this country and you’d probably just barely scratch the surface. So, to save you some time, we’ve put together a list of some of our favorite hidden American treasures that are worth adding to your bucket list.

When you think of Kentucky, you might think of the Kentucky Derby, Bluegrass, or bourbon, but did you know that this Midwest state is home to an underground National Park? That’s right, covertly tucked within the rolling hills of South Central Kentucky lies the longest known cave system in the world: Mammoth Cave National Park. This isn’t your run-of-the-mill cave, either; with over 400 miles of individual chambers and intricate labyrinths, this national treasure is one that you won’t want to miss. Fortunately, exploring this World Heritage Site is as easy as reserving one of many cave tours or walks with the National Park Service. 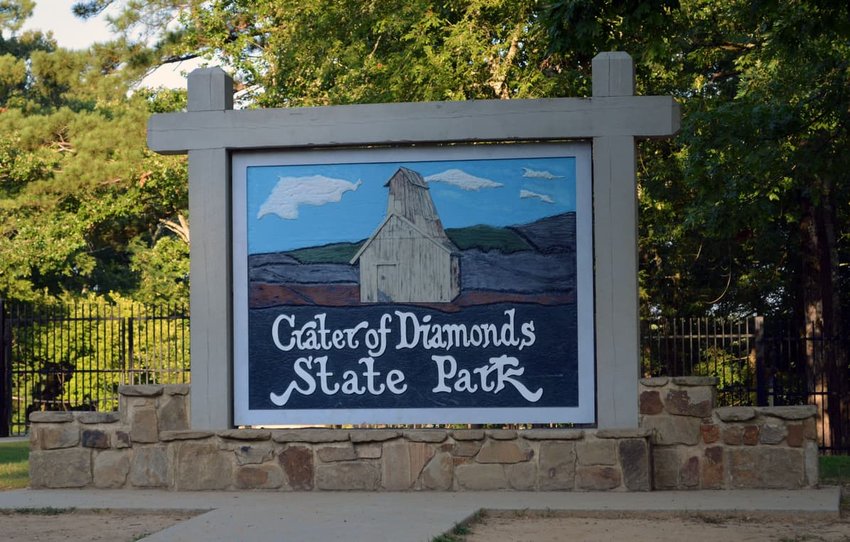 Speaking of anomalies in the South, what if I told you that you could spend an afternoon digging for diamonds in Arkansas? The aptly-named Crater of Diamonds State Park is the only place in the world where you’ll find 37-acres of diamond-bearing fields accessible to the public. These fields might not look like much, but more than 33,000 diamonds have been uncovered by park visitors in the last 50 years, one of which, a 7.44-carat diamond, was discovered by a teen just last year. Thanks to the parks infamous finder’s keepers’ policy, whatever treasure you uncover is yours to keep! 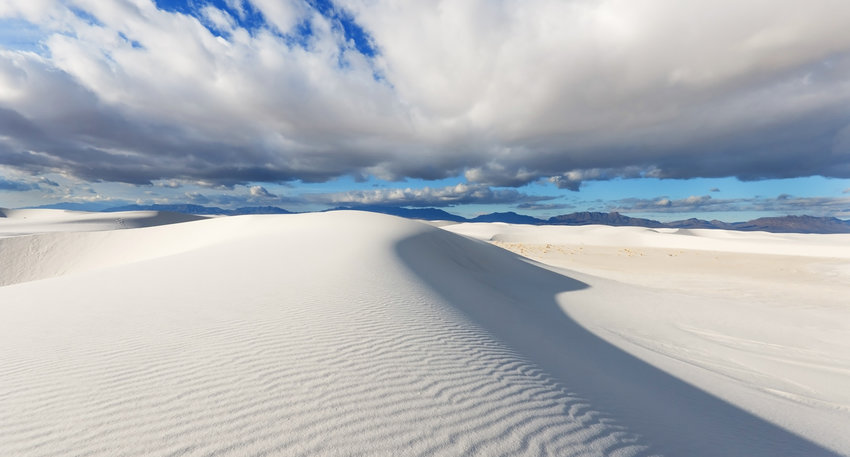 Granted, it’s not unusual to find sand dunes in the desert, but New Mexico’s glittering white gypsum dunes aren’t an everyday sight. In fact, they aren’t made of sand at all. Situated in the Tularosa Basin, White Sands National Monument is 275 sq. miles of gypsum, a soluble, transparent substance that takes on the appearance of snow-white sand. A serious case of mistaken identity, gypsum behaves more like snow than sand. Because this unique substance doesn’t absorb heat from the sun, you can actually kick off your sandals on the hottest day of the year without worrying about scorching your toes. Once you're done marveling at the dunes, there's plenty to do in the park, including camping, hiking, and sand surfing.

If you’re looking for the largest river gorge in North America, you might be surprised to learn that it’s not in Arizona. At 8,000 feet deep, Hells Canyon trumps its southern neighbor, the Grand Canyon, as the steepest and deepest canyon in the states. Carved out by the Snake River, Hells Canyon sits unassumingly on the border of Oregon, Washington, and Idaho where it can be enjoyed via the scenic Hells Canyon Scenic Byway or by way of guided boat tour. So, if you’re visiting the Pacific Northwest, you can still get your majestic canyon fix by hiking, biking, or exploring Hells Canyon. 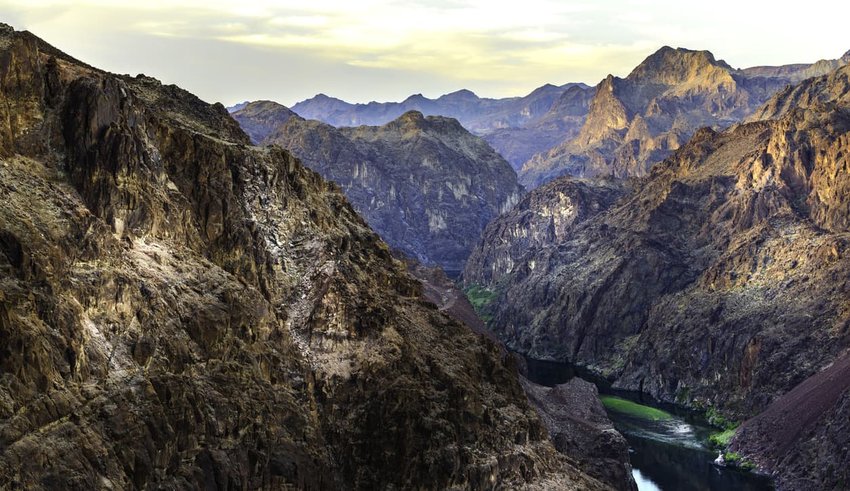 Looking to escape the bright lights and bustle of the Las Vegas strip? How about a peaceful, scenic paddle through towering canyon walls and into a hidden cave? Just 45 minutes from Las Vegas, in the Black Canyon of Arizona, lies Emerald Cave, where – you guessed it - the water sparkles an enchanting emerald green. First-time paddler? You’re in luck! The trip to Emerald Cave is only a 2-mile paddle upstream from Willow Beach and can be experienced via a guided kayak tour, which allows even the most novice kayakers to experience this spectacular hidden gem. 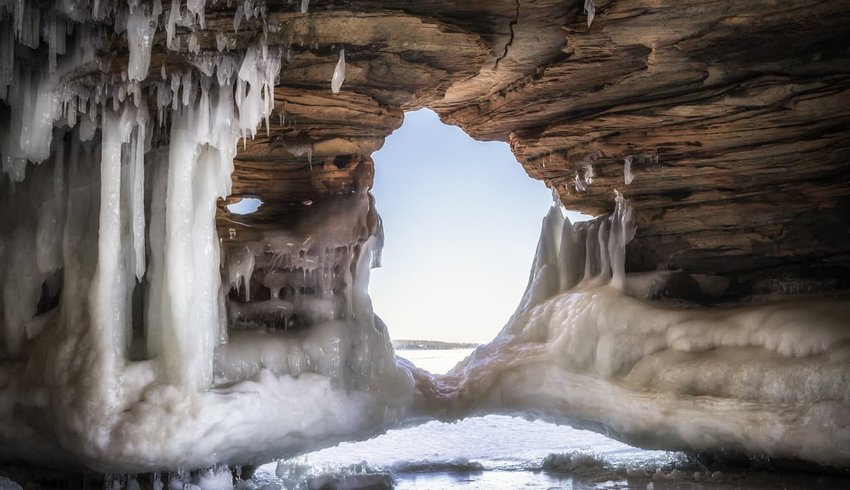 Nothing will remind you that you’re on Mother Nature’s terms quite like venturing to the Apostle Islands in search of ice caves. Each winter, crashing waves from Lake Superior freeze to form an intricate network of awe-inspiring arches and pillars. Adorned with an elaborate display of icicles, what makes these caves even more remarkable is their relative inaccessibility. Access to the caves requires very particular winter weather conditions and is dependent on thick ice forming a walkable pathway along the Lake Superior shore. In fact, the last time the caves were accessible to the public was in 2015, and unpredictable weather has prevented travelers from reaching them for several years at a time. That said, you never know when the weather will play nice, so if you happen to be traveling to this area in the winter, it’s worth checking the Apostle Islands National Lakeshore website to get updates on this Great Lake winter wonderland. 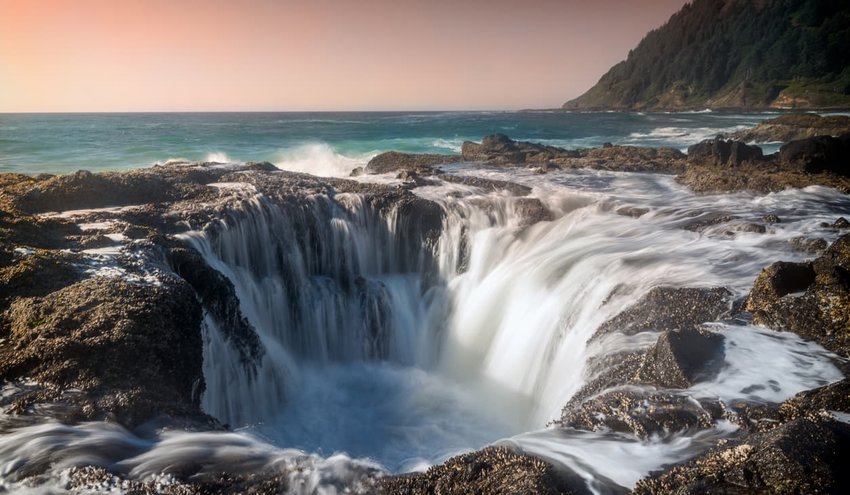 Although it’s been nicknamed the "Drainpipe of the Pacific," Thor's Well is best described as a powerful demonstration of natural beauty. Characterized as a gaping sinkhole, or euphemized as the Gates of Hell, this stunning site is a wonder to behold. As the tide rises, waves flow beneath the bowl, filling it from the bottom until water forcefully bursts from the top. A seemingly infinite well forms as waves crawl back into this natural feature on the coast. Adventurers be wary; Thor’s Well, albeit beautiful, isn’t your everyday tourist attraction. Although the feature itself isn’t particularly dangerous, its mystique is best captured when the tide is unpredictable, and rogue waves from the Pacific Ocean have been known to catch onlookers by surprise. Be cautious and prepared before wandering too close to Thor’s Well. 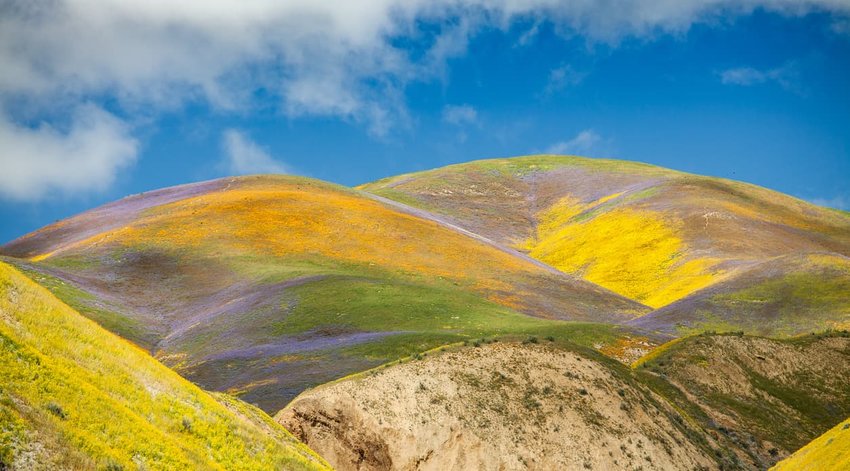 Known by locals as one of California’s best-kept secrets, Carrizo Plains National Monument is a remote, little-known treasure that is void of food, fuel, and cell phone service. Needless to say, if you’re looking to escape the city and find complete solitude, this is the place to go. Carrizo Plains National Monument also has a reputation of offering one of the most brilliant displays of wildflowers in the state. During peak superbloom years, the rolling hills of the Temblor Range are blanketed with vibrant yellow, purple, and orange wildflowers that seem to reach indefinitely across the horizon. Although blooms typically emerge from mid-March to May, they are wildly unpredictable and highly dependent on weather conditions. If you’re looking for your wildflower fix and hoping to stay off the grid, Carrizo Plains is a hidden gem you won’t want to miss.

If there’s one thing we can all agree on, it’s that from coast to coast, the states are teeming with diversity and amazement. And although you shouldn’t miss out on an opportunity to experience some of our country’s most recognizable landmarks, there’s also plenty of hidden treasures to explore along the way.

7 Worldwide Tea Traditions That You Can Do at Home