Telluride is one of those magical places that transforms with each season: wildflowers in the summer, golden mountainsides of the Aspens turning in the fall, a snowy winter wonderland, and bright greenery in the spring. Each season brings different activities that can appeal to all types of travelers: the explorers, mountain climbers, outdoorsman, and luxury-seekers.

Telluride has it all, and with spring quickly turning into summer, I packed up my bags and headed south to the mountainside oasis with full hopes of exploring what I heard was the most magical spot in Colorado. 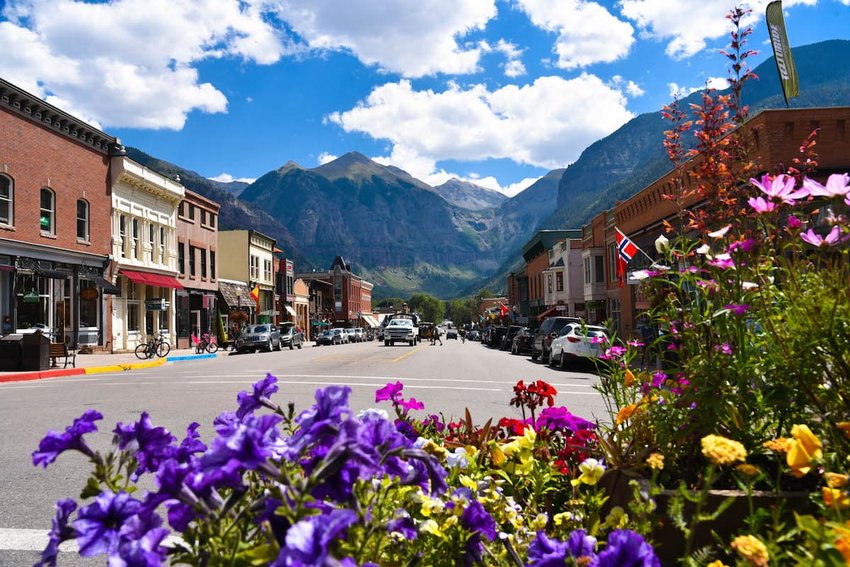 The town of Telluride, tucked away within the San Juan Mountain range in a valley of hanging waterfalls, is an outdoor enthusiast’s dream, and is only a six-hour drive away from Denver. There are two theories as to how Telluride gained its name: the first is that the name was derived from the mineral “tellurium,” based after the miners searching for mineral deposits of gold, and the second being an old, famous goodbye to those continuing their journey through the rigorous southern San Juan’s during the gold rush — “To-hell-you-ride!” 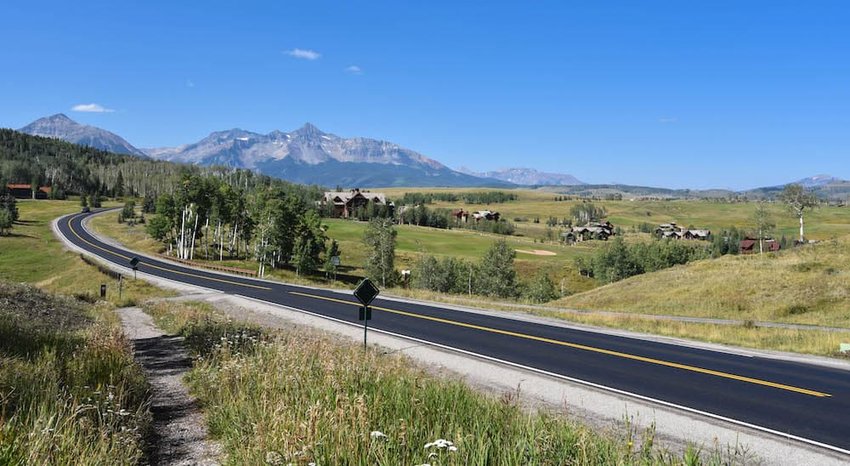 I pulled into the town of Telluride and felt like I had jumped back in time to the Wild West with cars replacing horse-drawn carriages. The original wooden buildings mixed in with charming and colorful Victorian-style homes and shops created a unique blend of old West with new. There’s no shortage of exploring in town. My first stop was a little local coffee and breakfast shop: The Butcher & Baker Cafe. Homemade bread and freshly-brewed coffee filled the air outside of the cafe drawing in locals and tourists alike. I grabbed a bowl of granola, a build-your-own sandwich to-go and planned out my afternoon hike. The best thing about Telluride being surrounded by mountains is there are trails that start right in town. Bridal Veils was my first stop -- the tallest free-falling waterfall in Colorado. 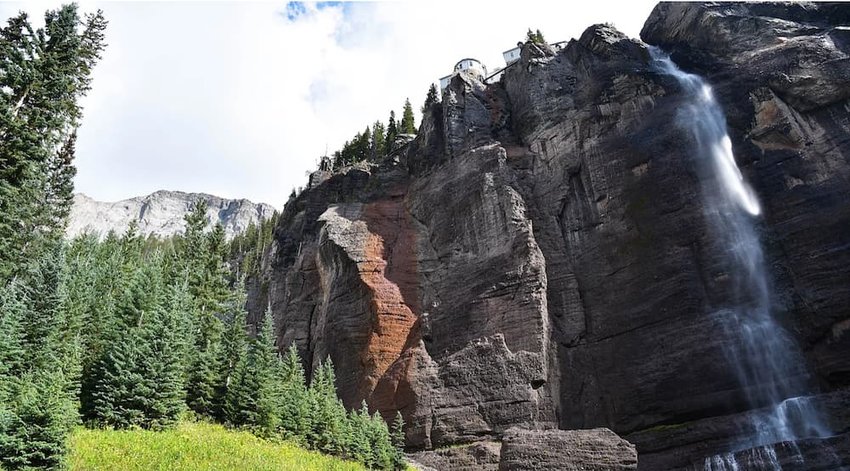 The 1.8-mile hike up gives you about 1,300 ft of vertical gain (yes, we track verticals in Colorado!) passing turquoise waters, crystal clear streams, and evergreens. The dirt road was mixed with off-roading vehicles and hikers all wishing to catch a glimpse of the hanging waterfall, and maybe even jump in if it’s hot enough! The roadways were covered with aspens that turn a bright gold during the fall. While the hike seems like a short distance, you’ll still want to bring plenty of water and a camera to capture the freshly bloomed wildflowers, hanging waterfall, and the still snow-capped mountains. On the hike back down to town, look up to see some of the rock climbers scaling the Via Ferrata, or test your own courage at the exposed rock climb (with a guide of course). 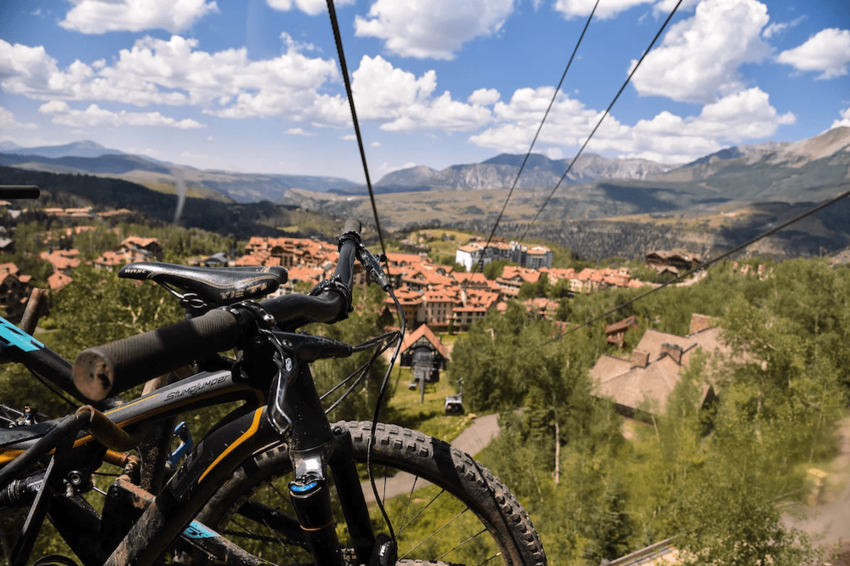 There are actually two parts to Telluride: Telluride proper, as in the main town, and the Mountain Village; both of which are connected by a 10-minute gondola ride over one of the mountains. I went back to change and get ready for the first stop of the night: Brown Dog Pizza, a local favorite. Rain is a rarity in Colorado, but that night it rained hard. I ran back to the Gondola only to see the clouds clear up and a double rainbow stretching from the valley to the mountainside.

Did I mention this place is like a real-life fairytale? The restaurant was only a few blocks away, and as soon as the rain lifted, restaurant windows reopened filling the streets with people's laughter echoing from inside. I walked into the Brown Dog, which I may or may not have chosen because the logo is a Labrador retriever (the type of dog I grew up with), and I was already salivating from the smell of wood-fired pizzas. And, vegans rejoice! They even had vegan cheese as an additional topping, which made my heart happy since I am vegan. After pizza, the night took me to the Last Dollar (locally known as the Buck) and Liberty Bar for live music.

The next sunny morning brought another wave of excitement for adventure. Again, the morning started with my return to the Butcher & Baker and some exploration into some stores. I ran into a street artist in town, who painted the picturesque scene of the flower boxes in the center of the street with 11,000-foot mountains majestically sitting atop the town. She was a local artist who traveled around Colorado painting the different landscapes. After talking about the different places she’s painted, and taking her photo, she sent me off with some more restaurant suggestions and hiking spots. Taco Del Gnar quickly moved to the top of the list for its variety of tacos, each under $4. And, always try the special because there’s a reason why it’s the special. It will QUICKLY sell out. 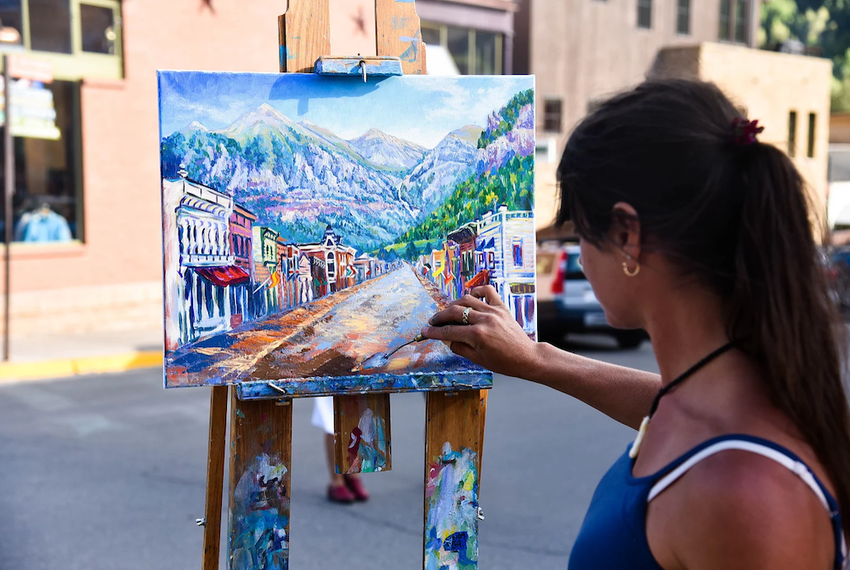 The Jue Wiebe Trail was calling my name after lunch. It’s a short hike, about three miles, but it can also be accessed right from town. The hike brings you through groves of aspens, an open meadow, and through evergreens towards the end of the trail. The expansive views of town, Bridal Veils, and the expansive mountains are what make it most impressive. The three-mile loop can be done by novice explorers and trail runners, which is why it’s a local favorite spot for an afternoon outdoors. While I stuck to the trails around town, there are endless options in and around Telluride including Blue Lake and Ice Lake, which are both accessible by trailheads about 20-30 minutes outside of town. 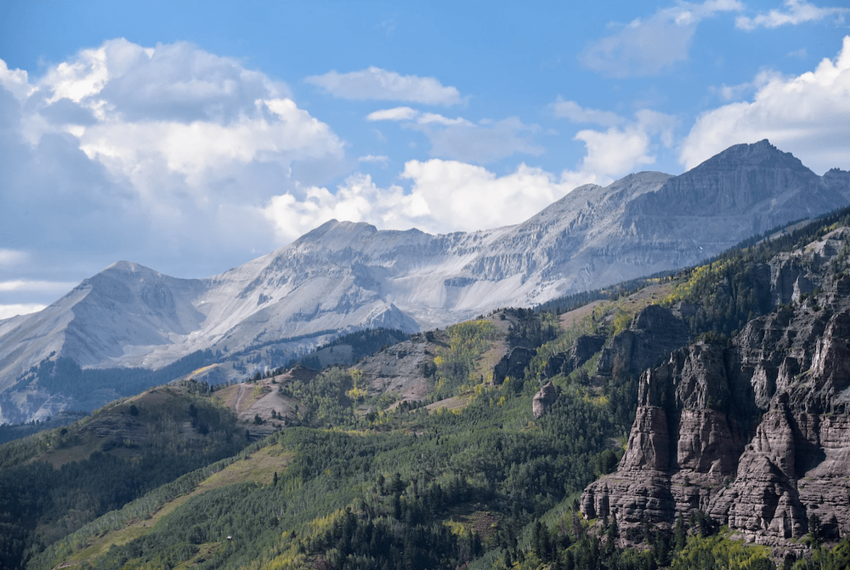 When deciding where to go next, the New Sheridan Hotel was obvious. It is one of the oldest buildings in town, originally built in 1891 -- four years after Telluride was founded. The original building caught fire in 1894, and was rebuilt, this time with brick, in 1895. Since then, the hotel and bar have been a hotspot for over 100 years. I walked into the New Sheridan bar and the smell of mahogany filled the room. I felt like I had transported back in time to when Butch Cassidy robbed his first bank. Black and white photos of old miners and townsfolk covered the wall with original brass-work still intact. While the hotel and bar aren’t exactly local spots, the history brings out-of-towners together to feel what it must’ve been like years ago when the town was just a mining spot.

Telluride is a magical place throughout the year, and having only experienced one season, I already know that I will be back for the others. I never knew what I was missing in my travels until I went to Telluride, Colorado’s hidden gem. 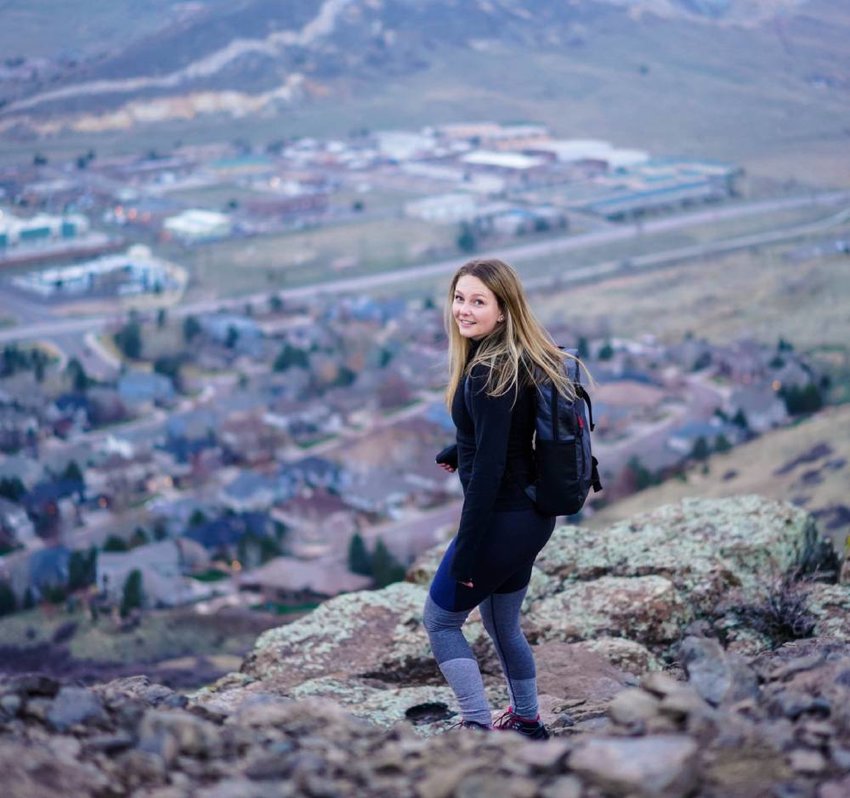 About the author: Claire Oswald
Claire Oswald is a health and lifestyle blogger who lives in the Mile High City. She is an adventure creator, an outdoor enthusiast, and a coffee addict with a passion for exploring new places and connecting her experiences with every day life.